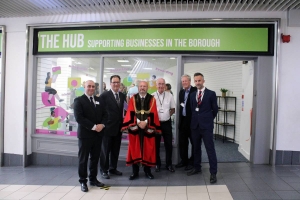 Businesses and would-be entrepreneurs around Great Yarmouth now have easy access to free business support and advice thanks to the launch of an exciting new Enterprise Hub.Great Yarmouth Borough Council has teamed up with the Town Centre Partnership to launch the service in Market Gates Shopping Centre.

The Hub is a new one stop shop for start-up, new and more established businesses and offers business advice, support, and training. Businesses can also book the space for their own business events.

The opening times are 10am – 4pm on, Monday to Friday. His Worship the Mayor, Cllr Graham Plant, officially opened the Enterprise Hub with a ribbon cutting on Wednesday 10, August at 11am, which was followed by refreshments and networking.

#BottleShipsGY moor up at their final destinations 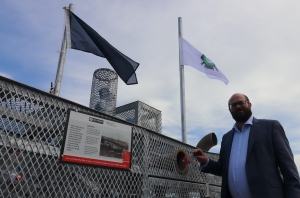 An innovative campaign to reduce plastics left on local beaches has launched today, with the aim of highlighting the importance of disposing of waste correctly.

Three new permanent #BottleShipsGY art installations have been installed in Great Yarmouth, Hemsby and Gorleston aimed at encouraging beachgoers to dispose of their plastic drinks bottles correctly, preventing them from entering the sea.

Each ship has been designed by artists Hatty + Young and has been inspired by vessels that form part of our proud maritime history, featuring plaques with historic information on each ship. Great Yarmouth Jetty saw the arrival of HMS Elephant, the Lydia Eva landed in Gorleston and Hemsby pays homage to its lifeboat, Sea Weaver. The BottleShips will fill with plastic bottles which will be collected for recycling. 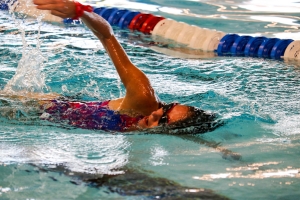 Members of the public have been able to try out Great Yarmouth's new £26m swimming and sports centre for the first time today.

Many of the facilities feature stunning panoramic views of Great Yarmouth beach, with a central atrium and café linking the promenade to the beach. 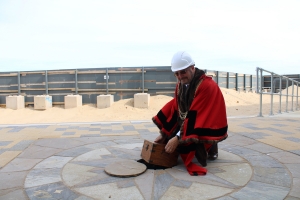 Back in 2021, the council invited members of the community to share their ideas on what they think should be included in a time capsule to be buried under the performance area in the new Marina Centre.

Items which will be buried in the capsule include events on a national such as Coronavirus updates, the Queen’s Jubilee and the 2021 census. There is also local news such as the media coverage for Visit Great Yarmouth Wheels Festival 2022, photos of the Marina Centre from the past, present and artists impressions and a photo of the current Mayor and Mayoress of Great Yarmouth, Cllr Plant, and his wife. 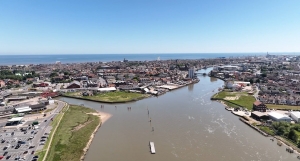 Plans to regenerate a riverside gateway site in Great Yarmouth are expected to take an important step forward next week with a move to compulsorily purchase parts of the site.

Great Yarmouth Borough Council has been working on proposals to transform the North Quay area into an exciting new waterfront quarter, turning the eyesore area into an attractive entrance to the town.

The four hectares of land is currently in piecemeal ownership and negotiations to bring the land together have been slow.

Now the council is proposing to use compulsory purchase powers to buy up the land so that its masterplan for the site can be made a reality. 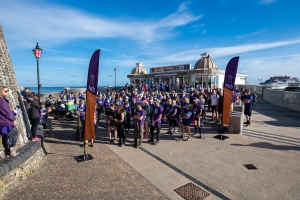 Spirited fundraisers rallied together to complete an epic walking challenge and raise more than £40,000 for East Anglia’s Children’s Hospices (EACH).

The charity’s Pier to Pier event was a 32-mile trek along the beautiful Norfolk Coastal Path. More than 160 people took part, starting in Cromer and wearily finishing several hours later in Great Yarmouth.

EACH events fundraiser Hannah Forbester said: “It was a huge success and we were delighted to raise more than £40,000. The support was fantastic and I loved seeing everyone rally together. There was a real sense of camaraderie and so much encouragement along the way. Prior to the walk, there had been lots of chatting in the event Facebook group. There was a real sense of excitement and it was lovely for people to meet up and share the experience on the day. The feedback after the event was very positive, too. It’s a huge challenge, both mentally and physically, and, understandably, there were a few nerves. However, everyone looked out for each other and the bigger groups buddied up with individuals and couples walking alone. There was a strong team ethic and everyone was determined to help each other over the finish line.”

Meet the Mammoth in the Market 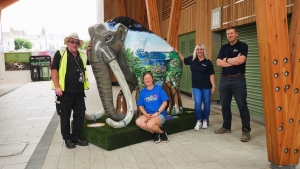 Thousands of years ago they roamed the Norfolk coast – now for just 11 weeks you can meet a mammoth in Great Yarmouth market!

Visitors to the town’s new six-day covered market will be greeted by a giant Steppe Mammoth sculpture called Yuuki from Monday 27 June, as part of the Break charity’s GoGoDiscover event.

The colourful creature has been sponsored by Norfolk firm Pentaco Construction, the lead building firm on the market project.

The installation is also being backed by Great Yarmouth Borough Council, which operates the market, and stall owners, who are offering a special discount to people taking part in Break’s GoGoDiscover trail.

People using the GoGoDiscover app on their phones, available for £1.79 on the Google Play or Apple Store, will be able to claim a 5% discount at participating market stalls after ‘collecting’ the sculpture on the app. This works by entering a code found on the mammoth’s plinth. 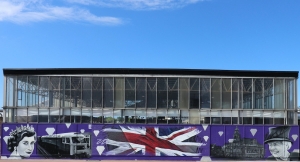 Great Yarmouth’s train station has been given a bright new look with a mural celebrating both the Queen’s Platinum Jubilee and the 140th anniversary of the Town Hall.

The artwork is the result of partnership between arts group Reprezent Projects, Greater Anglia, and Great Yarmouth Borough Council.

It features images of the Queen from 1952, the year of her accession, and from this year, alongside a picture of the train that brought her to Great Yarmouth in 1985 and the nearby Town Hall, which this year celebrates its own 140th anniversary. A large union flag sits in the centre of the artwork.

The artwork was completed this week and appears on the side of the Great Yarmouth train station building, off Acle New Road, next to a popular pathway. 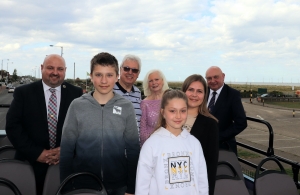 Free bus passes are being offered to Ukrainians being hosted by families in Great Yarmouth, thanks to a tie up between the local council and First Bus.

Great Yarmouth Borough Council leader Carl Smith heard first hand from families staying in the town how difficulties with transport was making it difficult for them to settle in and asked First Bus if they could help.

Now thanks to their generosity, Ukrainian guests will now be able to apply for a free one month pass for travel across the borough, and as far out as Norwich or Lowestoft.

Head of operations and engineering Chris Speed has donated an initial 20 passes for the scheme, which is being coordinated by the council.

One of the first families to benefit from the passes will be Mariana Peda and her two children Anastasiia and Vitalii. They are currently staying with hosts Sheila Daniels and Brian Huggins in Bradwell, having arrived from Sokal in west Ukraine around a month ago. 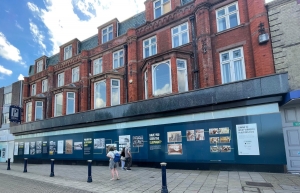 Work to create a new library, university and learning centre in the heart of Great Yarmouth has stepped up a gear thanks to a £3.5m partnership with the University of Suffolk and East Coast College.

Now East Coast College and the University of Suffolk have formally committed to the scheme, with a £3.5m contribution that will see the college teach degree level courses at the new centre, accredited by the university. The University of East Anglia is also backing the project, with plans to offer remote learning facilities for its students, alongside professional development courses.