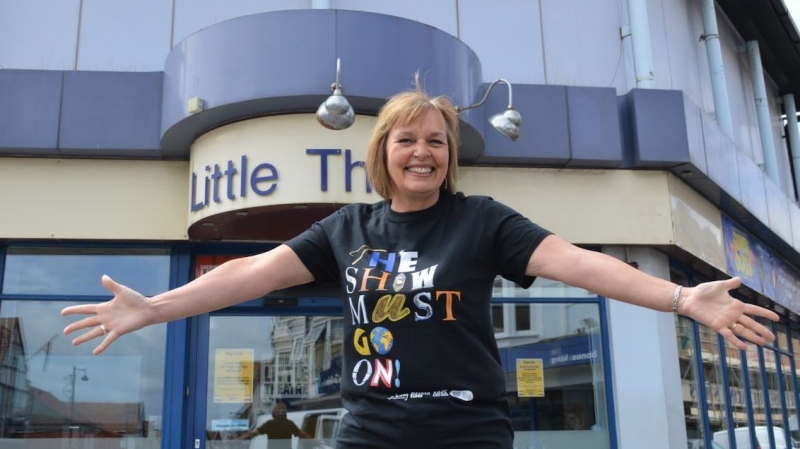 Let the sparkling lights at Sheringham’s Little Theatre help shine the way through the Winter gloom and lead you into a scintillating Spring.

With a superb selection of over two dozen exciting events already booked before the end of May, there will be something for everyone to enjoy.  And keep your eye on the website www.sheringhamlittletheatre.com  for more events and mainstream cinema being added.

Some productions come with added anticipation, having been paused by the pandemic.  Refreshed regulars are returning with sprightly fresh shows eagerly waiting in the wings.

To showcase the best of up-and-coming local talent, the energetic Youth Theatre will finally perform the beautifully crafted musical Guys and Dolls.  It’s on for three nights at Easter including Good Friday so make sure of booking your tickets early.

From 31 March to 2 April, the Little Theatre Players bring to life a classic comedy by J B Priestley.  When We Are Married is all about three couples celebrating their silver wedding anniversaries, having been married on the same day in the same chapel.  Or so they believe!

More local performers well worth your support are the century-old Cromer and Sheringham Operatic and Dramatic Society.  They bring their next show to the Sheringham stage from 9 to 12 February, with a Saturday matinee too.  Alan Bennett’s eccentric Miss Shepherd is The Lady in the Van.

Also long established is theatre group Stage Direct whose new drama is one more in a long line of highly successful productions.  They tread the boards with Miss Marble Takes a Break from 20 to 22 January.

Jazz fans will be delighted to see the return of Jazz at The Hub.  There are no fewer than five live sessions on the last Sunday of the month launching in January.  Having suffered the bitter disappointment of being the first band to be cancelled at the start of the pandemic, the Paul Hill Quartet now hold the privileged position of performing the first in this series of sets.  Visit www.sheringhamlittletheatre.com to see the list of much-loved musicians through to the end of May.

Known to many as a finalist on The Voice UK when she reduced Sir Tom Jones to tears, veteran folk and blues singer-songwriter Sally Barker takes over the Little Theatre stage for an evening of music from Joni Mitchell and Sandy Dennis.  12 March is the date to note for this folk-filled evening courtesy of local promoters Deckchair Productions.

More music of a different kind entirely on 4 March is Samia Malik showcasing her thrilling new solo show Songs to Heal and Empower.  At Sheringham to celebrate International Women’s Day on the following Tuesday, Samia’s bilingual work has the support of the Arts Council.

The Little Theatre is pleased to be hosting the final performance on 5 March of this third regional tour for The Canada Boys.  Another Rob John drama from well-respected fEAST Theatre, it is set in 1912 at the Norwich mustard factory of J & J Colman.  Ambition, love, duty and family feature in this local story.

Comedy in a cake shop on 19 March comes with a touring production of the Tobias Nicholls’ play The Last Crumb.

Audience participation is an essential element of the fund-raising show on 26 March by The Intellectual Hooligans from Norwich who base their entertainment around the TV programme Whose Line is it Anyway?

A one-act dark comedy thriller, My Other Half, premiered at the 2021 Holt Festival and now enjoys an exclusive preview on 22 March at Sheringham before an extensive East Anglian Tour throughout April.  Written by the Little Theatre’s very own Christopher Sainton-Clark.

An amazing mix of fun for little people will be the magic and mayhem of Captain Calamity.  Sheringham gives you three different shows to experience his wacky world of the Lollipop Lighthouse in Chocolate Button Bay!  Performances in February, March and April.  Book for one or all three!

Self-evident from this programme is how Sheringham Little Theatre manifests its continuous support for local actors and crew by providing a professional platform for their talent.  But the venue also brings you the very best of world-class performances from London and beyond via the modern technology of satellite.

Starting on 15 January the screenings get under way with Felicity Kendal and Gary Wilmot in Anything Goes.

Complete with a cast of 40, the new award-winning play from Tom Stoppard Leopoldstadt can be viewed from a West End stage on 27 January.

A very special screening on St Valentine’s Day from the Royal Opera House is the modern ballet classic Romeo and Juliet.

The Book of Dust by Philip Pullman is brought to the stage of London’s Bridge Theatre by director Nicholas Hytner on 17 February.

Verdi’s Rigoletto from the Royal Opera House is being screened on 10 March.  Verdi is the composer again for the next Royal Opera House screening of La Traviata on 13 April.  By contrast, sandwiched in between those two operatic occasions is Hex, which is the new musical retelling of Sleeping Beauty from National Theatre on 17 March.

The final presentation on the silver screen in this Spring season is the breathtakingly beautiful ballet Swan Lake from the Royal Opera House with the sublime score from Tchaikovsky.

There’s something for everyone in the Spring Season at Sheringham! Cole's of King's Lynn
With over 30 years of experience supplying the catering trade with our fresh fish and seafood, we have an established network of reputable suppliers giving us the opportunity to fulfil all orders and source the "hard to find" product's. We pride ...
Explore

Chris Crowther Author and Writer
Chris Crowther spent 42 years of his working life flying aeroplanes and helicopters in various parts of the world, mainly West Africa as Chief Pilot of a helicopter operation, and where his first books were written. After hanging up his flying ...
Explore Mattishall Golf Club
Mattishall Golf Club, located between Dereham and Norwich provides a 9-hole course that challenges experienced players, but is also a great course for those new to the game and a six bay covered driving range which is open to members and ...
Explore

Autumn Years Day Centre
‘We believe in nurturing the mind, body and spirit for all those 60yrs and over, with or without disabilities taking steps to a long, happy life.  Our meaningful activities stimulate physical, mental and social well-being throughout.  Our ...
Explore

Paul Dickson Books
Paul Dickson is an independent publisher, working with Norfolk writers. He is the publisher of the following books (all titles available from the All Things Norfolk online shop) : Miracle in Kigali, the story of Illuminee Nganemariya and her son ...
Explore

More in this category: « M+A Partners explain changes to the VAT late filing and penalty system It’s time to get motivated at The Edge Health & Fitness Club »
back to top